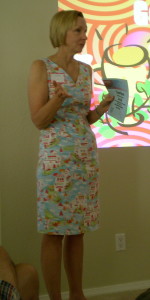 This program has helped me realize that losing weight is possible, and that eating a healthier low glycemic diet not only led to weight loss, but also to feeling better and having more energy.  It also motivated my husband to make changes and lose weight as well.

In August of 2008 I celebrated my 50th birthday!  Overall I have many things in my life to be thankful for and that bring me much happiness.  Hitting the 5th decade of my life though caused me to evaluate what I had accomplished in my life, what I was happy and unhappy with, and what I wanted to change so that next 30-50 years would allow me to be as healthy, active and independent as possible.  One major area of concern was my weight and overall health.  I was hovering around the 160 lb. mark, and seemed to be developing one health issue after another (menopause-early onset according to the Gynecologist, hypothyroidism, Osteopenia, anemic, low Vitamin D levels, just to name a few).

Even with the desire to know I needed to change my eating habits, by January 1, 2009 I weighed in at 166 lbs.  My New Year resolution was to lose weight.  I decided that there was no reason I couldn’t do this on my own, and so for over 3 months I dropped 6 to 8 lbs which was better than gaining, but far from a success.

In the meantime a colleague of my mine (Patricia Jones) had literally shrunk in front of my eyes from a size 10-12 to a size 2.  She had told me about the Fitabolize Fit in 5 program, and how it had worked for her.  I decided it was time to get serious, and make a commitment so I could attain the weight loss that I knew was possible.

I attended “Fitabolize Fit in5” introduction, and made the decision to give it a try.  On April 11, 2009 I was measured and weighed and officially started the Reset program on April 13th.   I also joined the club by so I could enter my daily diet and activities into the computer and receive input from my coordinator Liz Jones, as well as educate myself on a low-glycemic diet.

My husband was very supportive of my efforts, and decided that even though he knew he could not stay on the Fitabolize Fit in 5 program he would try to lose weight as well.  On April 13th he weighed in at 180 pounds.

In the first two weeks of the program I lost 6 pounds, which I was thrilled with.  I took my vitamins twice a day, and by week 3 was feeling better.  My skin looked healthier, I was less hungry then I had been before, my cravings for sweets and carbohydrates was diminishing, I had increased the intensity of my exercising, and my clothes were looser.

On May 16th I returned for the final weigh in and measurements.  I am thrilled to say that I lost 10 lbs, and best of all 10.3 inches!  My husband also weighed in on the 16th and was down to 169 lbs, the lowest he has been in several years.

This program has helped me realize that losing weight is possible, and that eating a healthier low glycemic diet not only led to weight loss, but also to feeling better and having more energy.  It also motivated my husband to make changes and lose weight as well.  I am now considering doing the next Fitabolize Fit in 5 starting Memorial Day to help me stick with the program, and hopefully lose another 10 lbs.  Thanks Fitabolize & Patricia & Liz Jones for helping me be successful with weight loss and leading a healthier lifestyle.